Onychomycosis (also known as “dermatophytic onychomycosis,”] “ringworm of the nail,” and “tinea unguium”) means fungal infection of the nail.  It is the most common disease of the nails and constitutes about a half of all nail abnormalities.

This condition may affect toenails or fingernails, but toenail infections are particularly common. The prevalence of onychomycosis is about 6-8% in the adult population.

There are four classic types of onychomycosis:  Classification 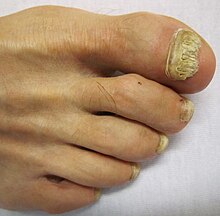 The most common symptom of a fungal nail infection is the nail becoming thickened and discoloured: white, black, yellow or green. As the infection progresses the nail can become brittle, with pieces breaking off or coming away from the toe or finger completely. If left untreated, the skin can become inflamed and painful underneath and around the nail. There may also be white or yellow patches on the nail bed or scaly skin next to the nail. There is usually no pain or other bodily symptoms, unless the disease is severe.[8] People with onychomycosis may experience significant psychosocial problems due to the appearance of the nail, particularly when fingers – which are always visible – rather than toenails are affected.

Dermatophytids are fungus-free skin lesions that sometimes form as a result of a fungus infection in another part of the body. This could take the form of a rash or itch in an area of the body that is not infected with the fungus. Dermatophytids can be thought of as an allergic reaction to the fungus.

Trichophyton rubrum is the most common dermatophyte involved in onychomycosis. Other dermatophytes that may be involved are T. interdigitale, Epidermophyton floccosum, T. violaceum, Microsporum gypseum, T. tonsurans, T. soudanense (considered by some to be an African variant of T. rubrum rather than a full-fledged separate species) and the cattle ringworm fungus T. verrucosum. A common outdated name that may still be reported by medical laboratories is Trichophyton mentagrophytes for T. interdigitale. The name T. mentagrophytes is now restricted to the agent of favus skin infection of the mouse; though this fungus may be transmitted frommice and their danders to humans, it generally infects skin and not nails.

Other causative pathogens include Candida and nondermatophytic molds, in particular members of the mold generation Scytalidium (name recently changed to Neoscytalidium), Scopulariopsis, and Aspergillus. Candida spp. mainly cause fingernail onychomycosis in people whose hands are often submerged in water. Scytalidium mainly affects people in the tropics, though it persists if they later move to areas of temperate climate.

Other molds more commonly affect people older than 60 years, and their presence in the nail reflects a slight weakening in the nail’s ability to defend itself against fungal invasion.

Aging is the most common risk factor for onychomycosis due to diminished blood circulation, longer exposure to fungi, and nails which grow more slowly and thicken, increasing susceptibility to infection. Nail fungus tends to affect men more often than women, and is associated with a family history of this infection

Other risk factors include perspiring heavily, being in a humid or moist environment, psoriasis, wearing socks and shoes that hinder ventilation and do not absorb perspiration, going barefoot in damp public places such as swimming pools, gyms and shower rooms, having athlete’s foot (tinea pedis), minor skin or nail injury, damaged nail, or other infection, and having diabetes, circulation problems, which may also lead to lower peripheral temperatures on hands and feet, or a weakened immune system.

Treatment of onychomycosis is challenging because the infection is embedded within the nail and is difficult to reach; full removal of symptoms is slow and may take a year or more, since new nail growth must entirely replace old, infected growth.

Most treatments are either systemic antifungal medications, such as clotrimazole, terbinafine and itraconazole, or topical, such as nail paints containing ciclopirox (ciclopiroxolamine) or amorolfine. There is evidence that combining systemic and topical treatments is beneficial.

For superficial white onychomycosis, systemic rather than topical antifungal therapy is advised.

In July 2007 a meta-study reported on clinical trials for topical treatments of fungal nail infections. The study included six randomised, controlled trials dating up to March 2005. The main findings are:

Research suggests that fungi are sensitive to heat, typically 40-60°C. The basis of laser treatment is to try heat the nail bed to these temperatures in order to disrupt fungal growth.

A Pinpointe type laser is available in the USA and approved by the FDA for onychomycosis treatment.

A Noveon-type laser, already in use by physicians for some types of cataract surgery on the eye, is used by some podiatrists, although the only scientific study on its efficacy as of 2010, while showing positive results, included far too few test subjects for the laser to be proven generally effective.

In 2011 several lasers were submitted for approval and two been cleared by the Food and Drug Administration.

Several companies have approval to market a Nd:YAG laser for onychomycosis treatment.

The wavelength of light produced by the lasers trialled is in the visible or infra-red range, and insufficiently high to produce direct dna damage as would be the case with ultra-violet lasers.

If heating is an effective treatment, then there would be many other low technology, low cost methods available to raise the temperature of the nail bed, including infra-red heating, warm air heating etc.

Nail fungus can be painful and cause permanent damage to nails. It may lead to other serious infections if the immune system is suppressed due to medication, diabetes or other conditions. The risk is most serious for people with diabetes and with immune systems weakened by leukaemia or AIDS, or medication after organ transplant. Diabetics have vascular and nerve impairment, and are at risk of cellulitis, a potentially serious bacterial infection; any relatively minor injury to feet, including a nail fungal infection, can lead to more serious complications. Osteomyelitis (infection of the bone) is another, rare, possible complication.